Here's a refresher on who Irvin Ellison was. He was my 3rd great grand uncle and he lived in Washington, Beaufort County, NC. His sister Caroline Ellison Bryant was my maternal 3rd great grandmother.

Before I get into Irvin's will, I wanted to give a shout out to Bernice Bennett's Blog Talk Radio show, Research at the National Archives&Beyond. If you missed her show on April 4th, Dower Slaves & Administrative Court Action -J Mark Lowe, CG, click on the link. Bernice Bennett's show runs every Thursday at 9pm and if you have the time and love genealogy, you should definitely tune in. J Mark Lowe was the featured guest this week and he presented tons of great information. One of the things I took away from listening to the show was the importance of reviewing court minutes and county records.  This inspired me to go take a look again on FamilySearch.org. at their North Carolina records. This is when I made my new discovery. 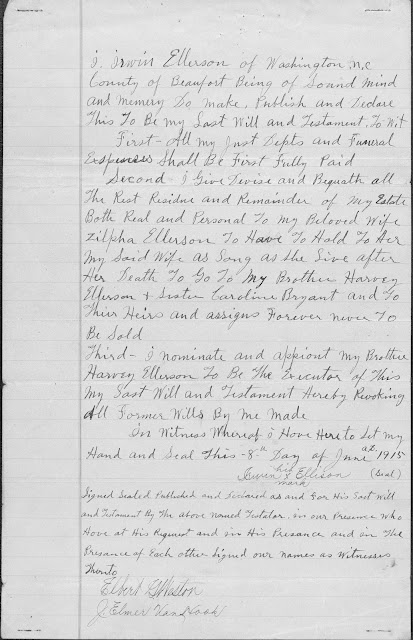 I, Irwin Ellerson of Washington, N.C. County of Beaufort Being of Sound Mind and Memory Do make, Publish and Declare This To Be My Last Will and Testament, To Wit
First - All my Just Debts and Funeral Expenses Shall Be First Fully Paid
Second - I Give Devise and Bequeath all The Rest Residue and Remainder of my Estate Both Real and Personal To My Beloved Wife Zilpha Ellerson To Have To Hold Her My Said Wife As Long As She Live after Her Death To Go To My Brother Harvey Ellerson & Sister Caroline Bryant and To Their Heirs and assigns Forever Never To Be Sold
Third - I nominate and appoint my Brother Harvey Ellerson To Be The Excutor of This My Last Will and Testament Hereby Revoking All Former Wills By Me Made
In Witness Whereof Have Here to Let My Hand and Seal This 8th day of June A.D. 1915
his
Irwin X Ellison          (Seal)
mark 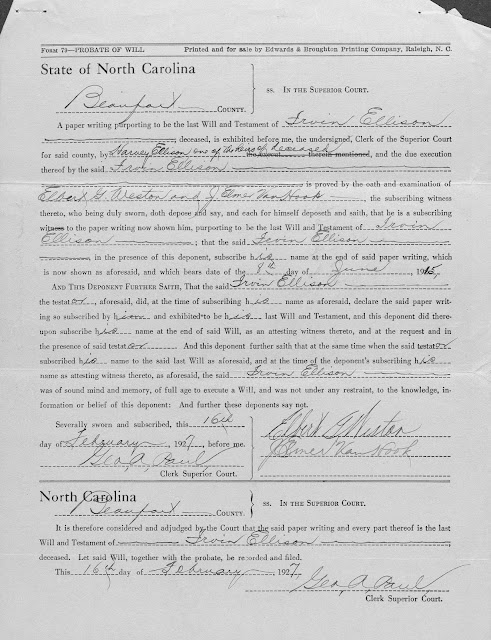 State of North Carolina   ]  SS.  In The Superior Court.
Beaufort County,
A paper writing purporting to be the last Will and Testament of Irvin Ellison deceased, is exhibited before me, the undersigned, Clerk of the Superior Court for said county, by Harvey Ellison one of the heirs of deceased and the due execution thereof by the said Irvin Ellison is proved by the oath and examination of Elbert G. Weston and J Elmer VanHook, the subscribing witness thereto, who being duly sworn, doth depose and say, and each for himself deposeth and saith, that he is a subscribing witness to the paper writing now shown him, purporting to be the last Will and Testament of Irvin Ellison; that the said Irvin Ellison in the presence of the deponent, subscribe his name at the end of said paper writing, which is shown as aforesaid, and which bears date of the 8th day of June, 1915.
And This Deponent Further Saith, That the said Irvin Ellison the testator, aforesaid, did, at the time of subscribing his name as aforesaid, declare the said paper writing so subscribed by him and exhibited to be his last Will and Testament, and this deponent did thereupon subscribe his name at the end of said Will, as an attesting witness thereto, and at the request and in the presence of said testator And this deponent further saith that at the same time when the said testator subscribed his name to the said last Will as aforesaid, and at the time of the deponent's subscribing his name as attesting witness thereto, as aforesaid, the said Irvin Ellison was of sound mind and memory, of full age to execute a Will, and was not under any restraint, to the knowledge, information or belief of this deponent:  And further these deponents say not.

North Carolina                     ] SS   In the Superior Court,
Beaufort County.
It is therefore considered and adjudged by the Court that the said paper writing and every part thereof is the last Will and Testament of Irvin Ellison deceased. Let said Will, together with the probate, be recorded and filed.
This 16th day of February, 1927
Geo. A. Paul
Clerk Superior Court