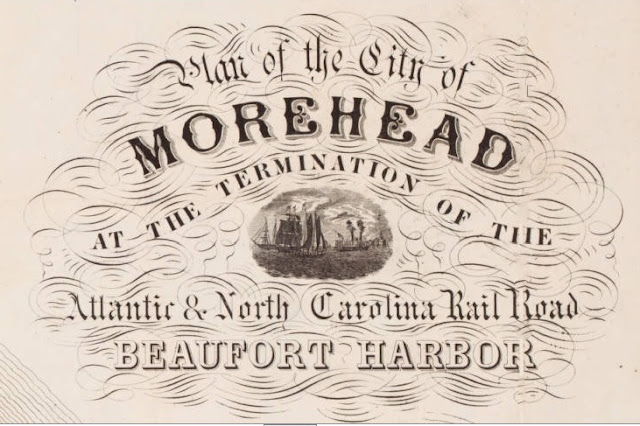 The last couple of days I have been pouring over books I have in my collection regarding Morehead City, NC.  This town holds a special place in my heart because it was the home place of many of my maternal ancestors. In fact, my roots have ties to this town going back almost to it's beginnings. I will go into further detail about that in an upcoming post. For now, I thought it would be good to share some history about this special place.

John Motley Morehead, who was the 29th governor of North Carolina, had the idea to develop this area, to take full advantage of it's great natural harbor.

The following is an excerpt from a book called "Morehead City Centennial Jubilee Book," that was published in 1957. This section discusses how the town was founded.

As early as 1852 Mr. Morehead directed his attention to the advantages of the harbor in this section. His investigations resulted in the purchase of 600 acres of land owned by the members of the Arendell family.  He purchased the first 300 acres for the sum of $933.33, paying the sum of $1,200.00 for the other 300 acres.  The purchase of the 600 acres comprise the present site of Morehead City from 24th Street to Newport River.

Following the purchase of this property Mr. Morehead organized the Shepard Point Land Company, acting as its first president.  He seems to have taken no active steps to develop his holdings into a city until the railroad was actually under construction in 1855.

In August 1857, Mr. Morehead began advertising that lots would be sold on November 11th in the new city laid off by the Shepard Point Land Company at the terminus of the Atlantic and North Carolina Railroad.  He stated the railroad would pass through the entire length of the city to its wharf at 18 feet of water.

The law granting the incorporation of the Shepard Point Land Company states in part:  "Be it enacted by the General Assembly... that William H. Arendell and John M. Morehead and such other persons as they may associate with be incorporated by the name and style of the Shepard Point Land Company with a capital not to exceed $500,000.00 That said corporation shall have power and authority to improve their land and property by filling and raising same above high water, to build wharfs, dredge out navigable channels, build hotels houses and make such improvements in said property as they deem proper, and the same to occupy, use and employ, for the benefit of said corporation, to lease, rent, sell, or any manner dispose of as they deem best for the interests of the corporation."

Only about one-half of the 600 acres of the Arendell property was surveyed and laid off into streets and building lots in readiness for the first auction sale.  This section extended from 15th street to the terminus of the Atlantic and North Carolina Railroad at Newport River.  It was not until after the close of the Civil War that the balance of the town site from 15th to 24th streets was gradually improved.


My eyes are getting tired so I think I am going to call it a night folks. More to come tomorrow.