If you missed part one to this series here's the link:  Morehead City...The Beginning. One piece of information that was mentioned in "Morehead City Centennial Jubilee Book," I want to highlight here again.

Only about one-half of the 600 acres of the Arendell property was surveyed and laid off into streets and building lots in readiness for the first auction sale.

This section of land ran from the terminus of the railroad at the wharf to 15th street in the city. I will go over a theory I have regarding the family land in an upcoming post and how this last statement plays a role in that.

There's also lots of  information about the founding of the town in another book I own called, "A Pictorial Review of Morehead City: History Through 1981."   The following section picks up with the year 1858.

Not until the completion of the railroad and the start of its operation on July 7, 1858 did any construction of homes or business places get underway. Within the next two years, building activities were in full swing. Shipments over the new railroad began to arrive from upstate for reshipment by boats to other ports.

One of those first buildings built was a hotel called the Macon House. It was built in 1860.  The hotel was practically brand new when it was taken over by Federal troops just two years later and used for a hospital. Eventually, it was used for officer's quarters.  The image at the beginning of this post was drawn from the balcony of this hotel. 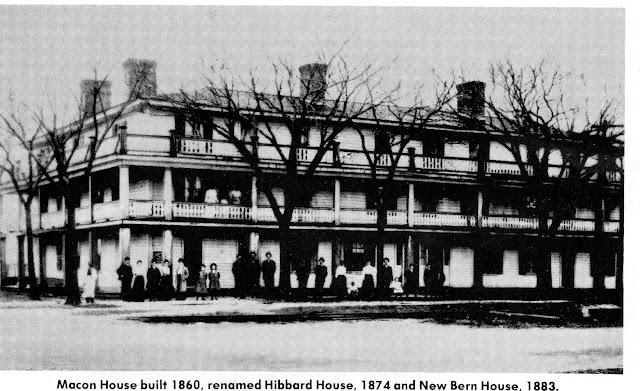 Image from "A Pictorial Review of Morehead City:  History Through 1981


This next section describes the demographics of the population in Morehead City in 1860.

Morehead City's free colored people was 4 and the number of slaves 197.

Now when I saw this last sentence, I had a flashback to a conversation I had once with my mother. She was telling me about one of her childhood visits to Morehead City and how whenever her mother introduced her to folks it always seemed to be with a, "Here's cousin such and such..." My mother flat out asked her mother, "Mom, we can't be related to all these people. Can we?" Well, what I know now is that most of the folks my mother met were in fact cousins and if they were not blood related...they were as good as. Families in this neck of the woods all knew each other, like from forever.  So yes, they were cousins.  :)
`
During the Civil War, development came to a standstill and the population slightly declined. Once the war was over, the economy picked up again slowly at first, but then it gained momentum with the building of the Atlantic Hotel in Morehead City in 1880.

My next post will pick up with my family's connection to the Atlantic Hotel. Until next time....