Amanuensis Monday: The Will of Rosa Mitchell Jones 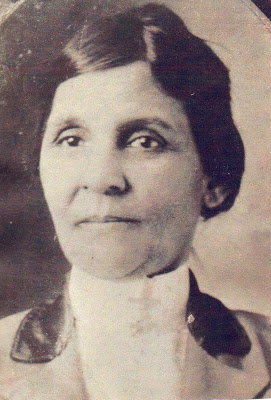 Sometimes I feel like a bit of a fraud when it comes to this whole genealogy thing. The reason is that I have been blessed to have access to so much information on-line. My ancestors managed to reside in places where good records were kept and those records have made their way into cyberspace. I shake my head and say to myself, "Why should I be so lucky?" Then I say, it has to be for a reason. These folks want their voices to be heard.  So with that being said, here's another thing I came across recently, the will of Rosa Mitchell Jones.  I wrote about my 2nd great grandmother on other posts. In case you missed those, here are the links.
So our people owned land...
The audacity to own land.,
Fearless Females --Six Word Memoir Tribute 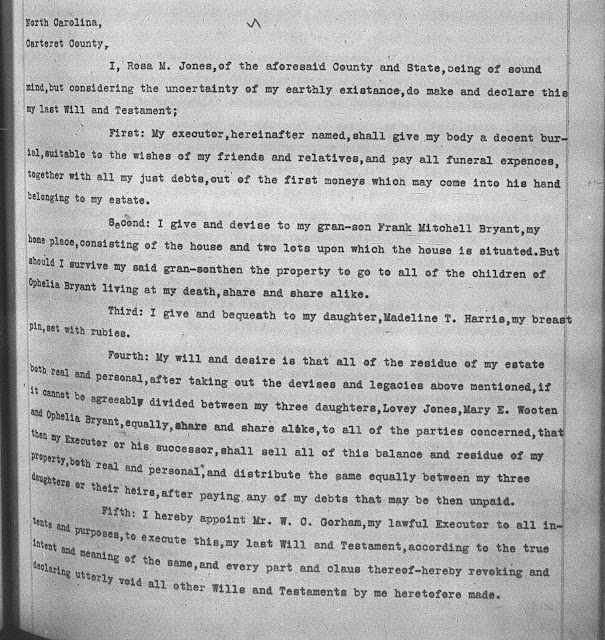 I, Rosa M. Jones, of the aforesaid County and State being of sound mind, but considering the uncertainty of my earthly existence, do make and declare this my last Will and Testament;
First:  My executor, hereinafter named, shall give my body a decent burial, suitable to the wishes of my friends and relatives and pay all funeral expenses, together with all my just debts, out of the first moneys which may come into his hand belonging to my estate.
Second:  I give and devise to my gran-son Frank Mitchell Bryant, my home place, consisting of the house and two lots upon which the house is situated. But should I survive my said gran-senthen the property to go to all of the children of Ophelia Bryant living at my death, share and share alike.
Third:  I give and bequeath to my daughter, Madeline T Harris, my breast pin, set with rubies.
Fourth:  My will and desire is that all of the residue of my estate both real and personal, after taking out the devises and legacies above mentioned, if it cannot be agreeably divided  between my three daughters, Lovey Jones, Mary E. Wooten and Ophelia Bryant, equally, share and share alike, to all of the parties concerned,that then my Executor or his successor, shall sell all of this balance and residue of my property, both real and personal, and distribute the same equally between my three daughters or their heirs, after paying any of my debts that may be then unpaid.
Fifth:  I hereby appoint Mr. W. C. Gorham, my lawful Executor to all intents and purposes, to execute this, my last Will and Testament, according to the true intent and meaning of the same, and every part and claus thereof-hereby revoking and declaring utterly void all other Wills and Testaments by me heretofore made. 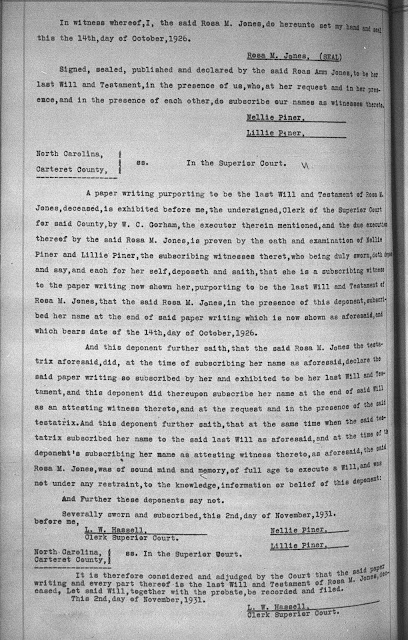 Rosa M. Jones   (SEAL)
Signed, sealed, published and declared by the said Roas Amm Jones, to be her last Will and Testament, in the presence of us, who, at her request and in her presence, and in the presence of each other, do subscribe our names as witnesses thereto.

A paper writing purporting to be the last Will and Testament of Rosa M. Jones, deceased, is exhibited before me, the undersigned, Clerk of the Superior Court for said County, by W. C. Gorham, the executor therein mentioned, and the due execution thereof by the said Rosa M. Jones, is proven by the oath and examination of Nellie Piner and Lillie Piner, the subscribing witnesses theret, who being duly sworn, doth depose and say, and each for her self, deposeth and saith, that she is a subscribing witness to the paper writing which is now shown as aforesaid, and which bears the date of the 14th, day of October, 1926.
And this deponent further saith, that the said Rosa M. Jones the testatrix aforesaid, did, at the time of subscribing her name as aforesaid, declare the said paper writing so subscribed by her and exhibited to be her last Will and Testament, and this deponent did thereupon subscribe her name at the end of said Will as an attesting witness thereto, and at the request and in the presence of the said testatrix. And this deponent further saith, that at the same time when the said testatrix subscribed her name to the said last Will as aforesaid, and at the time of the deponeht's subscribing her name as attesting witness thereto, as aforesaid, the said Rosa M. Jones, was of sound mind and memory of full age to execute a Will, and was not under any restraint, to the knowledge, information or belief of this deponent:

And Further these deponents say not.

North Carolina,  ]     ss. In the Superior Court.
Carteret County,]
---------------------
It is therefore considered and adjudged by the Court that the said paper writing and every part thereof is the last Will and Testament of Rosa M. Jones, deceased, Let said Will, together with the probate, be recorded and filed.
This 2nd, day of November, 1931.