The Book Of Me: Prompt 64 --Jobs and Careers 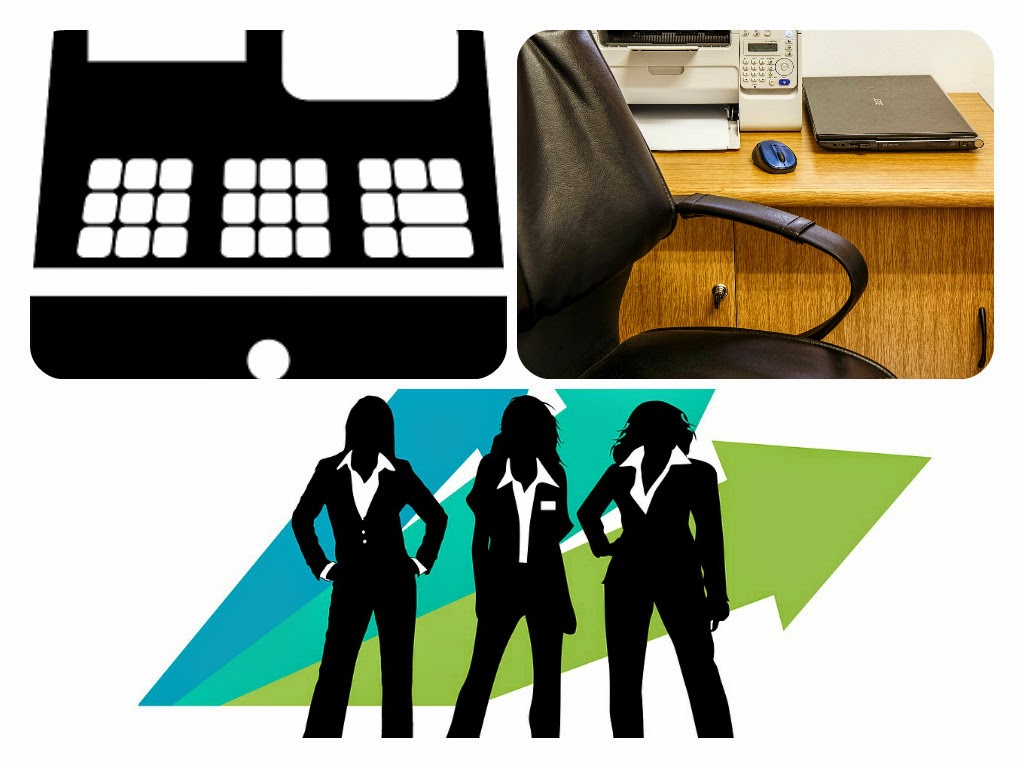 If you are not familiar with this wonderful project that was created by Julie Goucher of the Angler's Rest blog, please refer to this link:
http://www.anglers-rest.net/book-of-me-written-by-you.html
This week's prompt is - Jobs and Careers

Did you have a Saturday job, holiday job?
Where was it?
What did you do?
Can you recall who you worked for and with?
What was the biggest / most important thing you learned here?
Did it inspire your future?
Do you have any pictures / photos / clippings?
Did you have full / part time job?
Job or career
Does it not matter?
Is it the same?
Did you enjoy what you did? - Why?
Was it a passion or a means to an end?
Who did you work with?
Did you have work place reviews?
Did they fit with your personal plan?
Did you have a career / employment work plan?
Did you stay at home?
Or did you really want to?
Did you have employment hopes and dreams
Regrets

Jobs were the places I worked at that weren't going to be long term things. They were a means to earn money for whatever was going on in my life at the time.

Careers I consider to be the positions I was employed at after I finished college.

I think the best way for me to go about this prompt is to split things into two sections.

My first job was at McDonald's. That's right good ole Mickey D's. I was 14 years old with no work history and I had just received my working papers in the summer of 1987. I put on that wonderful little uniform and went to work. I hope my kids carry on in the tradition. I think everyone at some point should wear a uniform and have to go work. I think it teaches humility. Anyway, I worked there from June through August to pay for school clothes.

The next job I had was a discount retailer that has since gone out of business called Cheap John's. They were popular on Long Island in the 1980's--1990's.  I think I got that job the following year in the late Spring and worked through Fall of 1988. I may have my timing wrong on this one but that sounds about right. Anyway, I was a cashier there and then they had started to train me in the Fall to become a keyholder/bookeeper (What they called the person who was in charge of cashing out the registers at the end of the night and made the deposit and who wrote down end of day sales figures.) I quit before getting the position because I was so anxious I was going to mess something up. This was one of those times I let my anxieties get the best of me.

Here are the next three jobs that I can remember.

Next came working as an Orientation Adviser for what was then called SUNY-Binghamton but now is referred to as Binghamton University. Oooh I have to see if I can find one of our staff pictures. 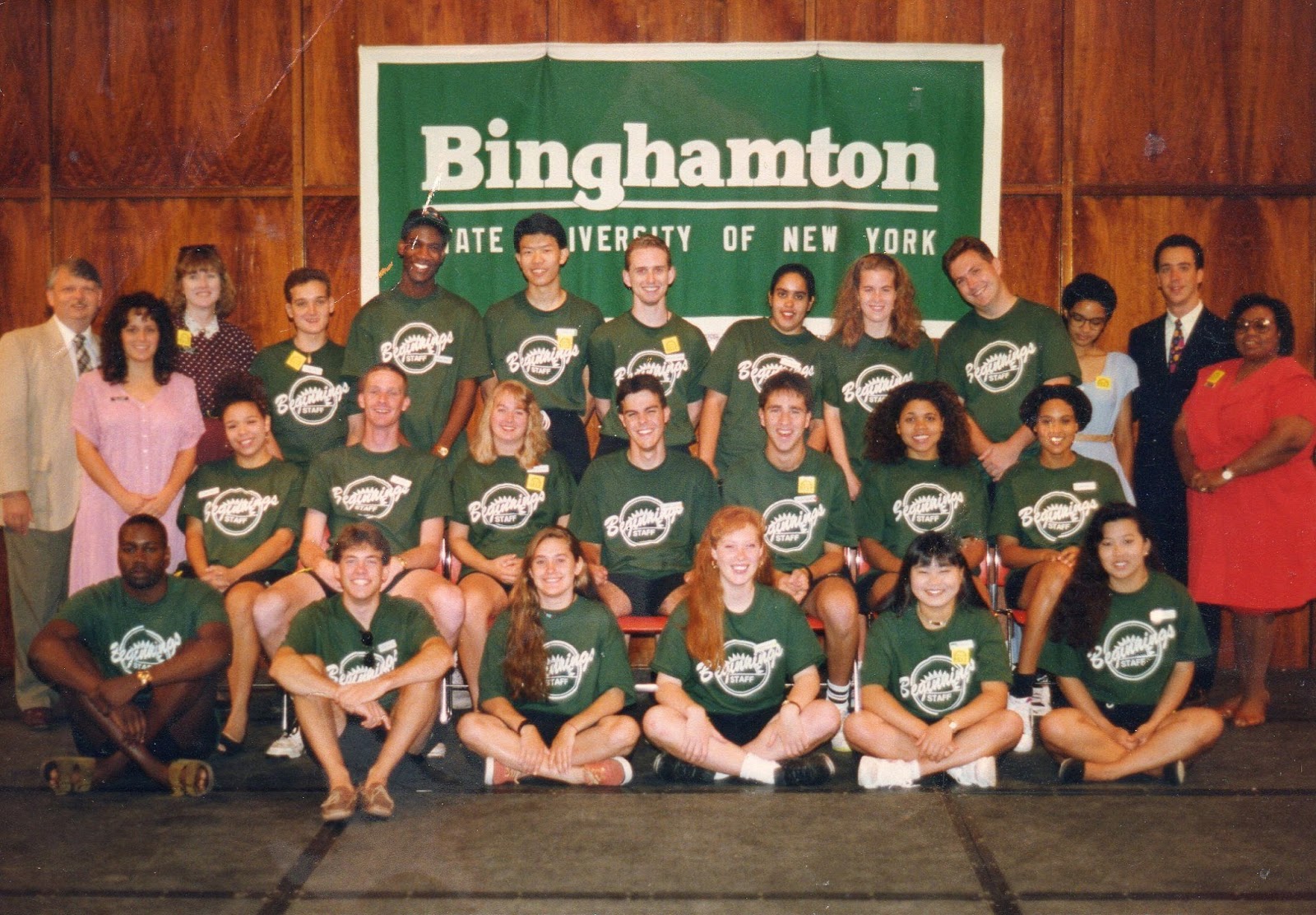 I worked as an Orientation Adviser for two Summers, 1992 and 1993. This picture is from the second year I was part of the staff. I really enjoyed this job. I developed my confidence with public speaking and I enjoyed working with a group of folks who had to achieve common goals. We would each get a group of about 15--20 Freshman to work with over the course of two days. We would lead campus tours, help them with choosing their courses and educate them on the basics of campus life. It was a lot of fun.

I was a cashier at the campus mini-grocery story called "Munchies." It was located in the basement of the University Union. That job was awesome because I had a lot of free time between customers to do homework or to study. Plus, my friends sometimes would pop in for a visit. At one point I was working part time at Munchies and I decided to try to squeeze in another job as a dishwasher for food services on campus but that didn't last long. It quickly became too much with my class schedule and the other activities I had going on. I lasted at food services for about a month.

Summer of 1994, I worked two part time jobs. The first one as a sales associate for a small printing company that was in Johnson City, NY called Printing Plus USA. I think I worked something like 32 hours a week there and then in the evening I worked for my area's paper, the Press and Sun Bulletin, selling newspaper subscriptions via telephone.

I believe I started working my next job at a store called C J. Buller in Fall of 1994. It took me an extra 1/2 semester to complete my bachelor's degree so I worked at Buller's part time while finishing up school. The store was a gift shop that sold leather goods and luggage as well. I really enjoyed learning about the different types of leather and luggage there. That place made me a better sales person.

I can't remember the specific timing of this but I think I picked up a part time job working at a bookstore that for the life of me, I can't recall the name of at this time. It wasn't Borders or Barnes and Noble. Oh well, when I'm not thinking about it, it will come to mind. The discount was nice though. Ah...it was Coles Books! Ha! Some of my brain cells are still working. LOL! That was in probably January--April of 1995.

May 1995  -- I was hired as a account sales representative for WKGB radio in Binghamton. I sold air time. The first time I ever sold something that wasn't tangible. I was given a list of businesses that I had to make contact with and attempt to sell radio advertising to. I lasted 8 months on the job. It was definitely a learning experience and I am glad I went through it. Especially, since that is how I met my husband. I tried to sell him advertising but instead walked away with a date and whole lot more. (It's crazy that we've been together almost 20 years! Where did all the time go?!) While this was going on, I think I still kept a few part-time hours going at C. J. Buller.


February 1996 -- I became an assistant manager for a Bombay Company Store. They sold furniture, pictures, mirrors and all sorts of home decor. This was another job I really liked and learned a lot from. I enjoyed showing people how they could go about decorating their homes. I learned how to hang pictures, mirrors, wall sconces, and how to repair and paint walls. I think I worked there until March of 1998.

March 1998 --Took a position as assistant manager at a Bath and Body Works store. If you can work for Bath and Body Works, you can work anywhere. The company specializes in selling shower gels, fragrance mists, and all sorts of other body care products. Fun job, great people to work with but they are not playing...you will work when you work for them! 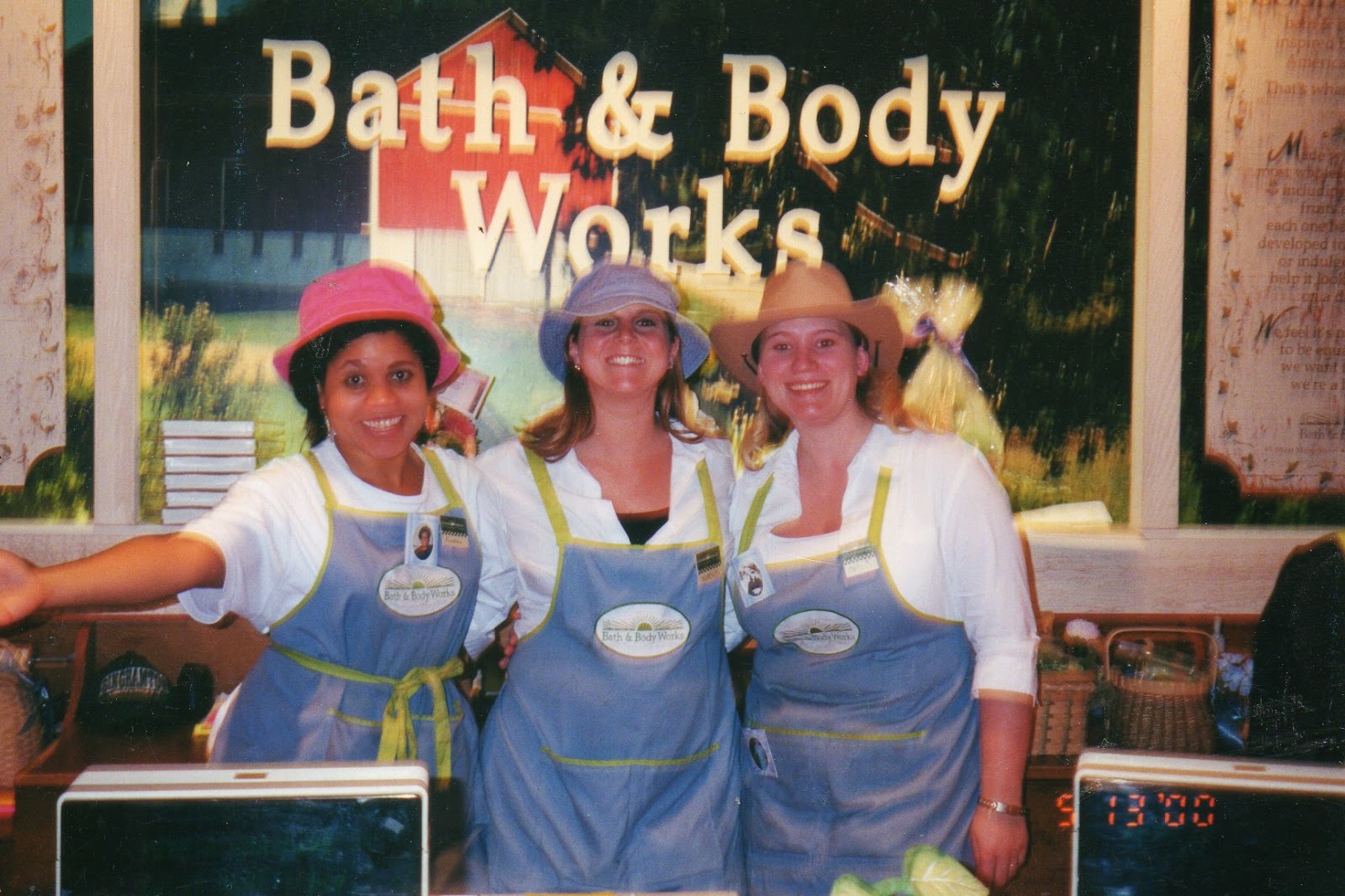 Me,  my store manager,Wendy, and
Amy, the other assistant manager. 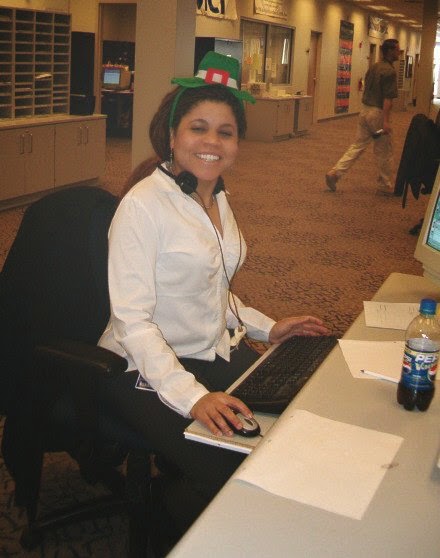 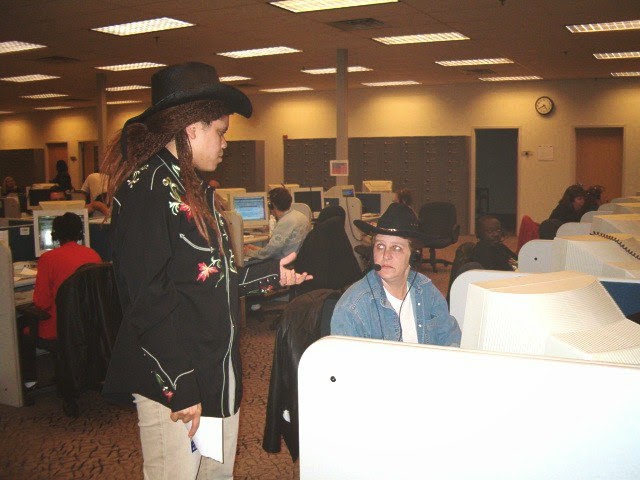 It amazes me how fast time flies. Has it really been 10 years since I worked at NCI. The answer is yes, yes it has. NCI stands for Nationwide Credit INC. They handle accounts receivable management services for various companies.  Towards the end of 2000, I was really feeling burnt out from working retail for so many years. You can never fully leave the job at the end of the day when you work at a store. Someone either calls in sick or there's some last minute floor move that the corporate offices sends notification of at 3pm in the afternoon when you are due to go home at 5pm. You wind up working long hours. I was just done, so I went to work at NCI. I was a unit manager, which meant I supervised 15 to 20 representatives who handled collections phone calls. I was the person who would get on the phone when an angry customer said, "I want to talk to your supervisor"  Needless to say, I learned quickly not to take the sometimes unpleasant things people would say to me personally.