If you missed Part one of this series here's the link: http://howdidigetheremygenealogyjourney.blogspot.com/2011/06/dave-sampson-true-riverdale-character.html

So where's this connection to Babe Ruth. Okay, here it is. Camp Bryan, Craven, NC used to be a popular hunting area and guess who used to come to this spot quite often? The Babe. Dave Sampson was the cook at the camp ground and knew all too well about the baseball player's huge appetite. Here's a section of Dave Sampson's obituary describing just that:

During about 30 years at Camp Bryan and previous experience with the army, Dave served many famous personages.  His intimacy with these men gave him the rare privelege of being able to relate about them many interesting anecdotes.
The cook used to say the thing he remembered most about Babe Ruth, was the batter's appetite.  "No wonder he weighs so much," he would say.  "He shore kept me busy cooking. I just couldn't cook him enough collards and corn bread."

The obituaries for Dave Sampson were just absolutely wonderful to receive in the mail. My thanks go out to Victor T. Jones jr. at the Kellenberger Room at the New Bern Public Library again. They are filled with so much information and really flesh out who Dave was as a person.  It is also absolutely amazing to me that in 1932,  a man of color had an obituary that seemed to just go on for days. When I say that, I am referring to the second one. 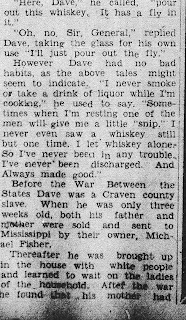