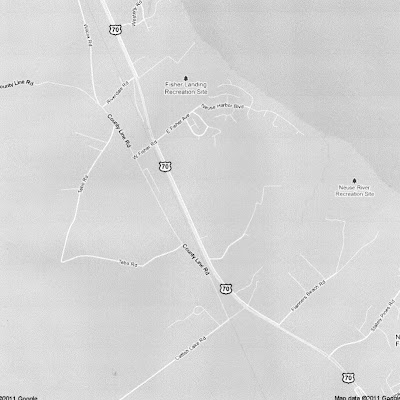 I so love using Google Maps to get an understanding of where family lived. I was able to get a general sense of where the land that Mortimer Mitchell owned by looking for clues in the deed description. Here is a map from Google Maps that looks at the Riverdale, Craven, NC.  If you take West Fisher Road to the end where it meets County Line Road, you will find Mount Olive AME Zion Church. I use this as my starting point since in the deed  says 6 acres were to be excluded for a church and meeting house. Now Mount Olive AME Zion Church I believe is the current church that is as at this sight, but I believe that there was an earlier church for African Americans on this land going back to before Mortimer Mitchell purchased his land. Well back to the deed it says the following:  "lying on the northwest side of the Meeting house branch, Beginning Where the Main Road crosses said branch thence down the branch to the great branch and With the great branch to the said Vine A. Tolson Corner to a marked bay.  Thence the said Tolsons live to the Main Road thence with said to Beginning."

Now it took me a little bit to figure out the lay of the land but this is what it appears to be.  The meeting house branch I believe refers to what is now Fisher Road and the Main Road would refer to what is now Highway 70. So starting with the northwest side of Fisher Road from the Highway on down to where Fisher meets County line Rd and where Mt Olive Church is gives us our approximate starting line for the property. The next question to myself was "Now how far back from Highway 70 does the land go?"  Back to the deed, it reads "to the great branch." This was when I was stuck for awhile until I hit the terrain button on Google Maps. I remembered that physical land markers were used to describe boundaries in deeds of this time such as wooden posts, a certain kind of tree, body of water, etc. When I hit the terrain button this is what popped up. 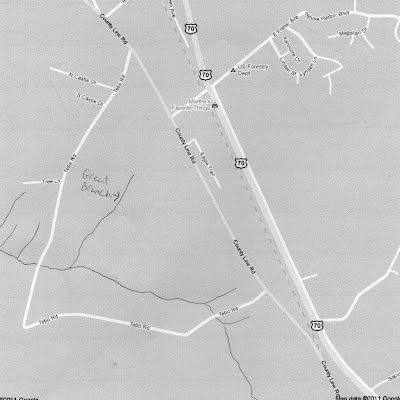 So great branch referred to a waterway. I know from research that Vine A. Tolson, mentioned in the deed, lived off of what is now Catfish Lake Rd toward the south. "A marked bay" more than likely referred to some tree that was used as a land boundary reference point.  So with that said, I know approximately where the land was that my 3rd great grandfather owned. 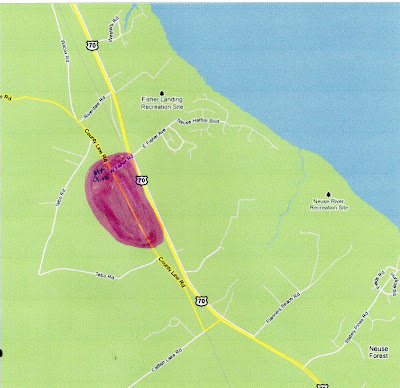 Now this is only an approximation, but I think this is totally cool! And yes my formative years were during the 80's so I apologize in advance for any excessive use of "totally" or "like". (smile)