Okay, I Got Bored And Changed Things Up A Little.

June 20, 2011
Okay, I got bored. Started playing around with the template...Yadayadayada, here's what the blog looks like now. I need to look at a brighter background for awhile. So anyway, I talked about the kindness of strangers in my last post and how that made it possible for me to have pictures of the graves of many of my Morehead City ancestors. Here is a picture that provides  perspective regarding how the Jones family is grouped together in the cemetery: 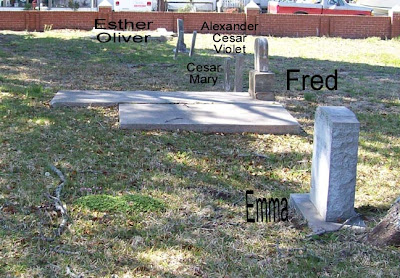 The children of Cesar and Mary Jones are the furthest away---Oliver and his wife Esther, then my 2nd great grandfather, his brother Cesar M, and then sister Violet Jones Devaughn. Next you have the parents Cesar and Mary (my 3rd great grandparents), Fred Douglas Jones (August 13, 1883--February 17, 1915) was the son of William Henry Jones( 1852--October 30, 1919), another child of Cesar and Mary.  William Henry Jones's grave is not seen in this shot or perhaps it is and the stone is gone now or perhaps it is in a different location. I will get back to that last part in a minute. Emma Shepard Jones(April 17, 1864--February 18, 1941) was William Henry's wife. Her grave is the last one in the frame.

Image courtesy of Find A Grave 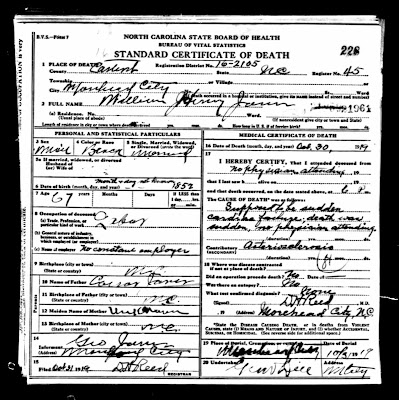 On the certificate it reads that month and day of birth not known but year was 1852.  Date of death reads October 30, 1919 and burial took place on October 31, 1919. The grave is not in the line with the other Jones relatives. Perhaps this is my guy. Perhaps it isn't.  I am thinking maybe the stone wasn't placed until sometime later and the wrong date is on the stone. I don't know. It just seems like the dates are so close that it is likely that this may be my guy.

If it isn't my guy, well I love old graves anyway.